Ofcom, the independent regulator and competition authority for the UK communications industries, have fined phone and broadband provider Plusnet £880,000 for billing former customers.

Due to an error in Plusnet's billing system, "1,025 customers who had cancelled either their landline or broadband service continued to be billed, meaning they were overcharged by more than £500,000 in total."

Despite the good work regulators such as Ofcom do in ensuring customers are billed correctly and firms held accountable for errors - there’s no guarantee in these situations that the overcharged amount will be reimbursed:

"Plusnet has made repeated attempts to refund all affected ex-customers by letter and by phone. It has refunded 356 customers a total of £212,140, which included interest at a rate of 4% for each customer. Plusnet has donated the remaining funds to a dozen local charities, in lieu of payments owed to customers whom it could not contact."

It's not the first large fine Ofcom have issued this year for incorrect billing. We wrote in January about the need for businesses to protect themselves from vendor billing errors, after Ofcom fined Mobile Network Provider EE £2.7m for overcharging tens of thousands of its customers.

Without an accurate inventory of all services and devices, and a system to highlight mismatches between inventory and billing, it's almost impossible for large enterprises to ensure they haven't been billed at the wrong rates, or for cancelled services. It’s not uncommon to find enterprises are still being billed for services going into offices they no longer own, or even into buildings which have since been demolished.

Fortunately, there is a way for businesses to identify these discrepancies for themselves. MDSL's Automated Invoice Processing (AIP) simplifies and enhances the way Telecom and Finance departments are able to process billing through the entire invoicing lifecycle. Large bills and complex formats can be processed to completion in minutes, with fully actionable alerts raised where necessary for measurable cost savings. 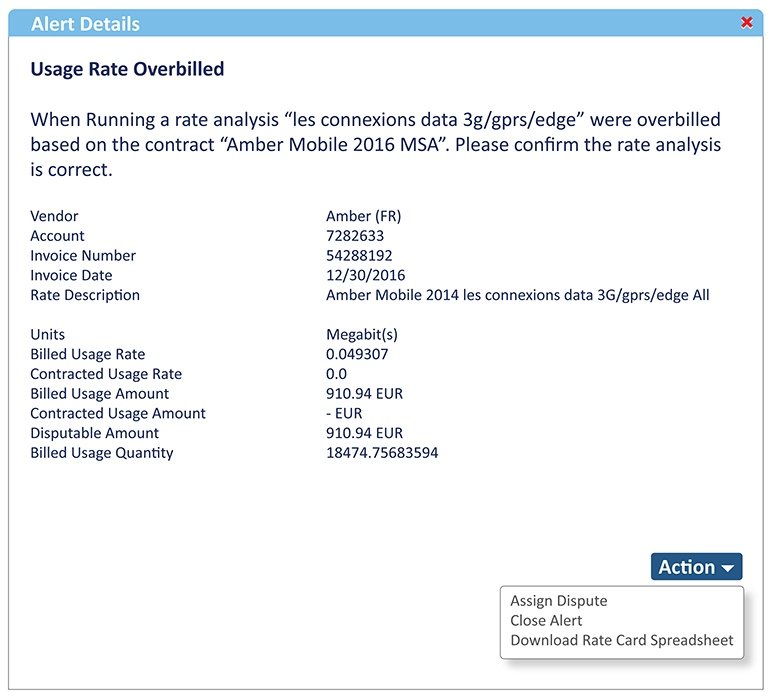 An automatic alert from MDSL's AIP

Using MDSL’s specialised interfaces, the AIP system reads billing from any carrier down to CDR level, normalises and validates the bills against your inventory, contracts and budgets and accurately allocates costs – automatically generating actionable alerts where mismatches appear.

AIP can then generate a report for you to send to your vendor.

For more information on Automated Invoice Processing, contact us on our AIP Page